The first Black person to successfully summit Everest from both sides

(Sibusiso being the first Black person) to walk to the South Pole, unsupported

– another remarkable achievement which won the duo the inaugural Solomon’s Adventurer of the Year, 2008 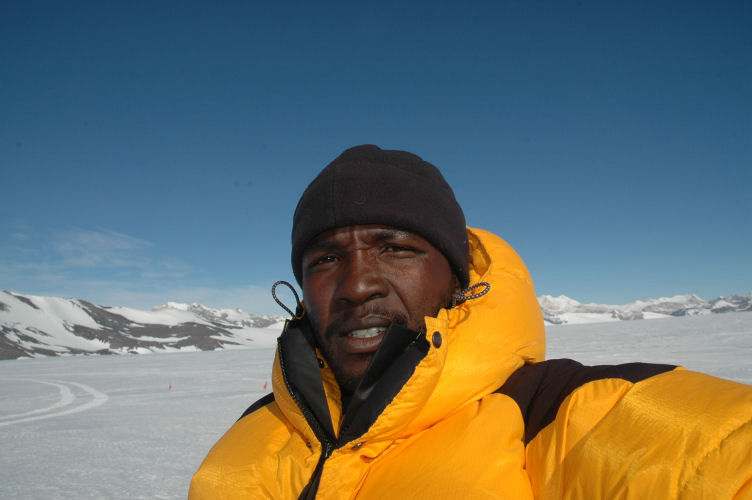 I am back from Climbing the Rwenzori in Uganda.

Report is I am happy with the products, I believe they work for me. I ran Comrades this year and had no issues whatsoever. I finished the race feeling fresh and drove home the next day. Cell food is ideal.

Then I travelled to Uganda to climb in the Rwenzori mountains. Because they are one of the mountains where you do not have enough time to acclimatise, I found that it was easy for me to climb and gain as much altitude in such short time. Our first summit attempt was within four days of starting and we got to the top of mount Speke at 4890m. I felt very strong even though it took us a long time - I was never exhausted. From Speke we went to take on the highest in that range. I got to the top of Margherita Peak 5109m without any trouble. Never felt any high altitude effects.

I cannot wait to test the product on Kilimanjaro this July when I double summit the same peak in 24hrs!

As you might recall that I had an attempted climb of Everest this year.

This was going to be my biggest test of how beneficial your products would have been.

However, having said that, I love the products and will not stop using them as I feel that they are great and helping me in all my adventure activities, which includes marathon running, a bit of cycling and climbing.

I have just returned from a Kilimanjaro climb and never felt any serious high altitude effects.

For me CellFood is working magic and I can only strongly recommend it to anybody who wants products that has effective result.

Thank you very much for the products and I will keep on using it for a long time!

Sibusiso Vilane was born at the then kaNgwane homeland which is now part of Mpumalanga Province, at an area commonly known as Shongwe mission. He then moved to Swaziland together with his mother after his parents separated. He never set foot in a class room until he was ten year old, before that he had already been chasing goats and cattle as a herd boy who walked barefoot. He got his O’levels in 1991 after which he went straight to a job environment. He spent 1½ years working as a manual labourer in a number of small construction companies. Then he got a job in Malolotja nature reserve as a tourist officer. This is where he met Mr. John Doble who later introduced Sibusiso to mountain climbing. Together they did hikes in the Drakensberg where Sibusiso grew the passion for climbing big mountains.

He then decided to move back to South Africa where he spent four years at Bongane Mountain lodge working as a game ranger.

SIBUSISO VILANE in 2005 became the first Black person to successfully summit Everest from both sides, his previous summit was in 2003 – succeeding on first attempts on both sides.

In January 2008 Sibusiso and Alex Harris became the first South Africans (and he the first Black person) to walk to the South Pole, unsupported – another remarkable achievement which won the duo the inaugural Solomon’s Adventurer of the Year, 2008.

Since his first ascent of Kilimanjaro in 1999, Sibusiso has summited that mountain 14 times, twelve of which have been guiding trips – the latest of which was in October 2014.

Sibusiso’s other mountaineering achievements are: in the Alps, successful summits of Platthorn (3345m); Meltelhorn (3406m); Matterhorn (4477m) via the Hörnli Arête Route, and a successful summit in June 2011, of Mont Blanc (4810m). In July 2011 Sibusiso was an assistant leader of a UIAA/MCSA Global Youth Summit in the Drakensberg, following by a summit of Mt Kenya’s Point Lenana (4984m).

In April of 2012 successfully did the last degree to the North Pole, this feat make him the first Black person in the world to do the three poles?

He still has a number of climbing and adventuring ambitions that he desires to pursue.

These are a few 8000 metre mountains including Everest again, and Crossing Greenland.

He has run and finished four comrades’ marathons. Going for his 5th in 2013, and doing it in support of 46664 Library champagne under the participate for good initiative, www.participateforgood.com

Sibusiso is a professional inspirational speaker, and is the recipient of the inaugural GIBS Speakers Annual Award, and guides mountaineering expeditions as a freelancer on a part-time basis.

He guided his first out of Africa expedition to Aconcagua (5962M) in South America in January 2012 where he succeeded in helping 5 of his team members to get to the summit of the highest mountain in the Southern Hemisphere.

In April 2012 became the first Black person to complete the grand -slam of Adventuring known as the three poles, these are summit of Mount Everest, North and South Pole.

He was honoured with the National Order of the Crown by King Mswati111 of Swaziland.

On 8 December 2011, he was among many others invited to a Reception hosted by the Queen of England (Queen Elizabeth) in Buckingham Palace, in recognition of those involved in Adventuring and exploration.

Sibusiso has just written his first book, titled ‘To the Top from Nowhere’, published by Aardvark Press of Cape Town.

He inspirational talks which are backed up by power point include:

Beyond Everest (His life experiences after Mount Everest, South Pole and his seven summit quest)

His aspiration is to be Mentor, Leader and Adventurer.